Every crisis chooses its heroes. The heroes do not volunteer for the role. Brave souls do not rush to the front line to save us. The heroes, ordinary folk until now, are plucked from their previous lives without warning, whether they are willing or not, whether they are ready or not. In this crisis, there are many heroes (see Heroes in Masks with Mops). Everyone who shows up for their shift—whether they be nurse, houseman, security guard, food service worker, physician, or one of the countless other individuals needed to care for the tsunami of sick COVID-19 patients overwhelming our hospitals–is truly performing an act of courage each and every day. The heroes for the history books, though, the heroes who will be remembered by their colleagues long after this plague passes, are the anesthesiologists, nurse anesthetists, respiratory therapists, and ENT surgeons who find themselves staring down this monster every day–some many, many times on a really bad day. These are the special people whom we will always remember with an admiring nod and a tear of appreciation. 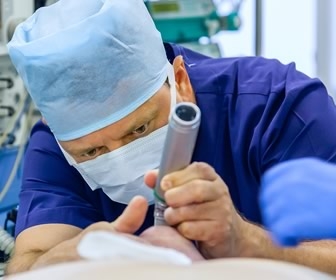 The AIDS epidemic was the last plague that truly threatened US medical workers. While Ebola and H1N1 challenged us, neither of these crises presented a general threat to the health of our practitioners in this country. AIDS, however, during the terrible years of the late Eighties and early Nineties, killed our practitioners as well as our patients. We forget now, because of brilliant scientists like David Ho and countless others, who have given us effective treatments for HIV. But for several years, AIDS actually was the leading cause of death of people under age 40 in this country, the only time any disease displaced trauma from the top of the list. AIDS killed EVERYBODY it infected. And if the medical professional caring for the critically ill AIDS patient suffered a significant exposure, there was a definite possibility that they would die–horribly, because everyone with AIDS in those days died, horribly. Whole wards were filled with young people dying, horribly. Many AIDS patients developed severe intra-abdominal crises that required urgent surgical intervention. Surgery on these patients was fraught with the possibility of killing the surgeon, because these patients generally had extremely high viral loads at the time of their surgical crisis. This was the first time in memory when we had a national discussion about whether a doctor or nurse was morally obligated to care for an ill patient.

Doctors and nurses were dying. General surgeons, resident surgeons in training, orthopedic surgeons, surgical techs, and scrub nurses were at risk from needle sticks, blood splatters, intra-operative incidents of all kinds; significant or seemingly mundane, but now mortal injuries. Some surgeons refused to operate on HIV positive patients, hiding behind the argument that the patients were all dying anyway. This left the rest of us scrubbing on more and more of these dangerous procedures as others subtly deferred consults. Scrub techs and nurses willing to operate in dangerous conditions were increasingly called upon to fill in for those who declined. NY state entertained a law requiring surgeons who seroconverted to notify all patients of their status in the never-proven concern that a patient might contract the disease from the practitioner. So we stopped getting tested after every needle-stick, we even stopped donating blood, because we were not only risking our health, but also our ability to practice. It was a double-edged sword, with both edges pointed toward the practitioner. We stopped telling our spouses and colleagues about every torn glove or needle stick during an AIDS patient operation, because we stopped thinking about it as soon as we left the OR. But we kept operating on HIV patients, trying blunt-tip needles, extra-thick latex gloves, even chain-mail gloves—none of which helped in the least. Be careful, assume every patient is positive, universal precautions, we were told—all of it went right out the window with the next trauma patient in shock.

This plague has picked a different hero. Now, the riskiest moment for the health care practitioner is the intubation of a deteriorating COVID infected patient. In every hospital, anesthesiologists, anesthetists, and respiratory therapists, as well as many emergency medicine physicians and ENT surgeons, are placing their heads in the maw of the dragon as they insert an endotracheal tube needed to save a patient’s life. There is not a more dangerous maneuver in our current practice. Even worse than the surgeon operating on the AIDS patient, our modern knights staring down this dragon are not protected with chain-mail gloves, cannot even see the enemy, because it attacks—not in a spray of blood or with the pain of an errant needle—but in an invisible miasma. The risk of each individual intervention may be less, but the anxiety so much greater, as no one knows as they pull off their mask if, on this occasion, the dragon’s breath got past their shield. There is no choice but to take a deep breath, say a little prayer, and go on to the next patient.

When our anesthesiologists, anesthetists, ER docs, and respiratory therapists applied for training, none of them took a moment to ask themselves if they were brave enough to do this work. The job interview didn’t include a question about courage. No one signed up for this. They just do the work we need them to do to save our lives. When this is finally over, we will not forget that.